Budapest Puppet Theatre is one of the largest puppet Theatres in Central Europe. The main purpose of our performances for families and adults is to demonstrate the diversity of puppetry, and the fact that puppet theatre does not indicate an age group but, rather, a genre.

Budapest Puppet Theatre is located at one of the most beautiful places of the Hungarian capital, Andrassy Avenue (a World Heritage site), in an 1870 historic building, in which Theatres – several cabarets and the National Theatre’s Chamber Theatre – have been operating since 1907. The State Puppet Theatre opened its doors here on 8 October 1949, as the only professional puppet theatre in Hungary, which it remained for decades, whose repertoire, in addition to shows clearly made for children, included productions for adults as early as the 1950’s.

Throughout its history, the institution, having changed its name into Budapest Puppet Theatre in 1992, has proven the legitimacy and equality of puppet shows with other genres of the performing arts with puppet versions of the classic dramas and classical pieces. In our two venues – the four-hundred-seat auditorium and the Playgound, a studio seating 100 – over 100,000 people attend over 300 performances each season. Since the foundation of the company, the Hungarian puppets have conquered the world: our company has guest starred over seventy times on the five continents; our performances have received great success at the most prestigious domestic and foreign festivals, receiving numerous professional awards at home and beyond.

In the 1960’s the unique productions of the theatre drew the attention of the international art scene. These shows, pushing the boundaries of the genre and showcasing the latest tools and trends of puppetry arts, were “choreographed” for classical music. This innovative spirit is cherished by the Budapest Puppet Theatre’s current performances for children and adults.

In most cases, the first theatrical experience of a child is that in a puppet theatre; therefore, we are consistently working on making our shows lasting, complex, aesthetic ones. Our repertoire includes works of both Hungarian and foreign writers, pieces by classic and contemporary authors, inspired by folk tales and other stories, new dramas commissioned by the theatre and inventive adaptations – what they do have in commonis that they all provide high quality base for our performances, which are highly colourful both in terms of puppetry technique and from a visual aspect. Our musical choices include frequent live cooperation and honour the spirit of the great musical productions of the past. Striving to preserve tradition and self-improve is not only an attribute of our family repertoire: the youth and adult performances are an increasingly significant part of the productions of the Budapest Puppet Theatre.

Creative programming keeps the theatre’s artistic work fresh and relevant. Budapest Puppet Theatre, alike the genre, is an open theatre. We welcome new ideas and inspiration coming from young emerging puppet artists as wel as renowned designers and directors arriving outside the organization to enhance the genre with fresh creative force. Apart from in house productions we host visiting productions from Hungary and abroad, we organize BÁBU (Puppet) Festival, a forum for performances exploring the genre from new aspects as well as take part in international projects.

Budapest Puppet Theatre is first and foremost a local theatre, catering the community of Budapest as well as Hungary, but enjoys an international reputation. We would like to be known as a pioneer for puppetry, consistently setting the standard and raising the audience’s expectations at home and beyond. 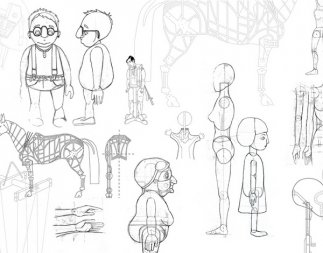