Meeting point (City Tour by Bike): CITYRAMA Ofiice, Budapest, Báthory utca 19, 1054
After a short stop at the Hungarian Parliament we ride across the Buda side to discover the Castle District, the oldest part of Budapest (Matthias Church, Fishermen's Bastion, Labyrinth of Buda Castle, Alexander Palace and Royal Palace). Next we go back to Pest and pass the Gresham Palace, the Hungarian Academy of Sciences, and the St. Stephen's Basilica. The route to the Heroes' Square takes us along Andrassy Avenue, part of the World Heritage since 2002. Notable spots include the Opera House and the House of Terror, which commemorates the two main oppressive regimes in Hungary: Fascism and Communism. Finally we cycle around the City Park (Széchenyi Bath, Vajdahunyad Castle).
The tour ends at the CITYRAMA Office. 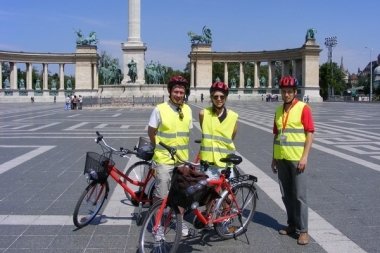