From Szabadság Square the steep Horgos Street takes us down to the Square named after Bishop Ranolder. He had the former Institute for the Education of Girls of the Sisters of Charity, today's Márton Padányi Bíró Primary and Secondary Grammar School built.

The gem of the square, which is full of modern buildings, is the oldest church of the town still in its original condition, St. Anne's Chapel dating back to 1724. From here Jókai Street leads us to Séd Brook.

The valley surrounded by Jeruzsálem Hill and Várhegy (Castle Hill) was inhabited by clerks and craftsmen in their mostly single-storey detached houses. In the period of Socialism (1948-1990) historic districts, especially Jókai Street were not favoured. Due to this unfortunate town policy and the lifestyle of the poor families settled here the former Hosszú utca (Long Street) became ruinous and neglected. The large-scale restoration of the district was launched in the past few years.

It is worth climbing up one of the steep lanes opposite the castle from where we can see a picturesque view of Várhegy. The massive, yellow building towering above us to the right used to be the only castle prison of Hungary. The left side of Jókai Street, opposite the prison, used to be called the "speak-house" becasue the inmates and their relatives exploited the good acoustics of the valley to talk to each other. Between 5-8 November 1944 the Hungarian Crown and the Holy Right Hand were guarded at 31 Jókai Street.

In the niche of the Neoclassical building at 38 Jókai Street we can see the statue of St. John Nepomucene, which is always decorated with flowers.

Turning left after crossing the bridge in Patak Square, a narrow path by Séd Brook leads us to the entrance of Betekints Valley. Here we can choose three directions: we can turn left to the zoo, or if we walk up the stairs leading up hill, we will get to Gulya Hill where we can see the Africa-paddock, the Chimpanzee-World, or the Hungarian domestic animals (sheep, goats, horses) as well as lamas and dromedaries or we can go riding in the Riding School of the Zoo.

If we follow the brook, we can walk through Betekints Valley, once famous for its mills and inns. This is one of the calmest and most beautiful parts of Veszprém with families coming here to walk and relax. Due to the wonderful natural scenery elegant villas were built by the brookside.

The pleasant walk by the brook leads us to a lake. The Greek Orthodox Nunnery of the Greek nuns was built nearby in the 10th century. These buildings were destroyed during the Turkish invasion and the Jesuit Order started building in its place. After the dissolution of the order, the Baroque church was left unfinished but its ruins can still be seen. This place serves as the starting point for numerous routes to discover the neighbouring landscape. 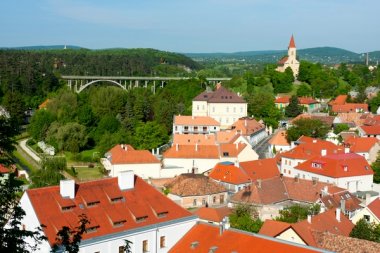