Walk in the modern town centre

Our walk is starting from Szabadság Square and leading us around the town centre offers a varied picture. In the second half of the 20th century Veszprém underwent deep changes in the course of which a new town centre was built around the new pedestrian street.

The old small-town houses all but disappeared and were replaced with socialist-realist buildings becoming of a county seat according to the then approved, maybe false and megalomaniac vision. After the change of regime, however, it became evident that the new town centre had to be reshaped to become the atmospheric, intimate and light district that would match the town.

Lets us start our stroll by crossing the gateway by the tavern called Szürkebarát in Szabadság Square to discover the town centre! While relaxing in the cafés of the winding Fortuna, Gizella and Sarolta courtyards we can peep into the everyday life of the locals and can see many shops as we walk up and down the stairs.

The exhibition of Mestermű (Masterpiece) Gallery is open for visitors all throughout the year. After passing the shops we arrive at the main square - the real scene of everyday life. The square is vibrant with life: the young come and go, pensioners enjoy the sunshine and the rare calm weather, shoppers hurry up. Frequently there is also street music. József Somogyi's statue called "The Three Graces" (Három grácia) is a fountain attracting splashing children in summer.

Lajos Kossuth Street, the pedestrian street shows a two-sided picture: its northern side is lined with mellow old houses while the other side is taken up by the "masterpices" of modern architecture such as the twenty-storey building replacing the nice little civic houses. The main post office can also be found in this square. Both sides of the slope of Kossuth Street are full of shops and offices and in summer the terraces of cafés' offer very pleasant entertainment.

The recently renovated Lutheran Church can be found in this street with László Márton's marble statue titled "Sorrow" (Bánat) on a small pedestal by the starirs leading to the church. As you reach the end of the street and look at the other side of Brusznyai Street, you might be surprised by the Ararat statue depicting Noah's ark. The statue was erected by the Armanian minority in memory of their holy mountain.

If you turn right at the end of the street, below the arcades, you will be back in Szabadság Square and see Kapuváry House, the former Town Hall of Veszprém in front of you. Here we turn left towards Dezső Laczkó Museum and Erzsébet Park. If we go straight on, we will get to the theatre, if we turn right we can see the old town with the castle. 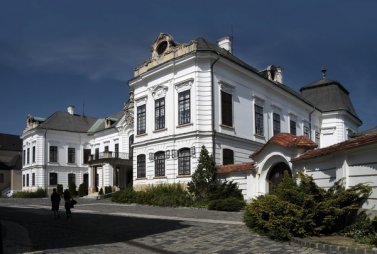