Walk around the Theatre Garden

Starting from Szabadság Square let us walk towards the traffic lights. At the corner we can see the most beautiful building of the square: Kapuváry House. The Rococo building with its wrought iron balcony and the coat of arms of the family who had erected it in 1793 dominates its environment.

The town later purchased Canon Kapuváry's Palace. Now private offices operate in the former Town Hall. After crossing the road it is worth looking back at Kapuváry House and observing the side with the coat of arms of the town depicting a horseman with his drawn sword - recalling the town's past as a border fortress.

At the other side of the crossing you can see a grey one-storey building: the former Korona Hotel and Restaurant. In the late 19th and early 20th century this was the best and most elegant restaurant in town. The sculptor Imre Csikász' relief on its wall tells us that Sándor Petőfi, one of the best known Hungarian poets stayed here in 1848.

Opposite us we can see one of the most beautiful buildings of Veszprém: the County Hall. This huge building dominates the square. It is worth observing this Neo-Renaissance palace carefully. The most ornamental part of the County Hall is the centre part with Corinthian columns and female figures impersonating justice, administration, agriculture, industry, trade and arts. The front is crowned by a tympanum with the date of building ("1887") and the coat of arms of the county. Behind the vaulted main entrance we can see the contemporary coach and pedestrian gates. You must go inside and admire the small, intimate inner courtyard. The assembly hall named after King St. Stephen and decorated with huge glass windows can be found on the first floor. The building houses the County Assembly and its offices. The County Hall is separated from the former főispán's (High Sheriff) residence by a steep narrow lane. Until World War II the county was governed by the főispán for whom this eclectic building was erected.

Next to it, the 19th century palace which was to serve as home to the Financial Directorate, functions as the town's Music School. If we stop here and look in the direction of Erzsébet Park, we can see the main building of Dezső Laczkó Museum among the trees. The collection of the building, whic was completed in 1922 according to István Medgyaszay's plans, came into being thanks to the Piarist monks, particularly the geographer and teacher, Dezső Laczkó, who the museum was named after. We can see his statue by the museum. Next to it we can see the Bakony House, an exact replica of a gentry house from the settlement Öcs (near Pula). This is a real skansen building abounding with the accessories of the village life of the previous century: the open-chimney kitchen, furniture carved from wood and the interior with the typical corner bench.

The park is an oasis in the town centre with locals, especially students from the nearby university, sitting on its benches. Let us turn back towards the road and have a look at Calvary Hill (Kálvária Domb) on the left. This was the centre of the medieval district, St. Michael Hill with a church named after St. Michael, the patron saint of merchants at the top. Today we can only see the ruins of this church. After the Turkish wars a Calvary was built in its place. The reconstruction of this place popular for strolls was finished a few years ago.

The palace opposite the hill, on the other side of the road was the Steward's Office of the bishop. The eclectic building with Romantic features - built according to Henrik Schmahl's design - houses Károly Eötvös County Library today. As sson as we enter the courtyard it becomes clearly visible that the building underwent thorough reconstruction: at the end of the nineties the Romantic inner parts were combined with Postmodern steel-glass structure. At the entrance we can see the bust of the namegiver. The library offers Internet services and gives home to the Veszprém office of the European Information Point and the American Corner.

The Theatre Garden is the remaining part of the once huge Bishop's Garden. Its outer part used to be a vegetable garden and orchard while the inner part was the town park with Petőfi Theatre as its most beautiful sight. The Sezession (Central European Art Nouveau) building with folk motives was completed in 1908. The work of painter Sándor Nagy, "The Legend of the Magic Stag" decorates the back of the theatre. If we walk back to the entrance and up the stairs we can admire the wonderful glass window overlooking Ferenc Óvári Street. You can see it at its nicest if you have a look at it it from the other side of the street in the evening when it is illuminated.

Our starting point, Szabadság Square is only a few steps away from here but if we turn left we can walk towards the Valley Bridge. 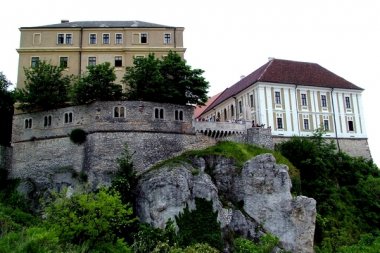