Ruins of the Greek Orthodox Nunnery and Jesuit Church

If you have more time, you should visit the remains known as the ruins of the Nunnery of the Veszprém-völgy (Veszprém Valley) Nuns in Séd-völgy (Séd Valley) near the zoo. Its ruins were excavated in 1936. Legend has it that the gorgeous coronation robe of Queen Gisella and maybe that of her husband were prepared here. Queen Gisella herself is said to have participated in preparing the rich embroidery of the robe. The faithful replica can be seen in the Queen Gisella Museum.
The monastery was erected in the 10th century an its ruins were excavated in 1938. The sovereign's splendid crown cloak was embroidered here, on the rich embroidery of which Queen Gizella herself worked as well. The reproduction of the cloak made in 1867 is presented in the Beatified Gizella Diocese Collection. 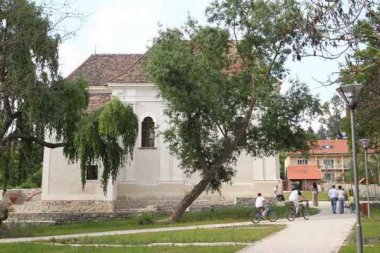