The equestrian statue of Ferenc Rákóczi II. and the Memorial Column to the Battle of Szôreg are situated on the square. Names of the thirteen generals who died martyr deaths at Arad are listed on a marble plaque placed at the foot of the Memorial. Building situated on the side from the direction of the River Tisza there is the world famous Bolyai Institute. In Rerrich Béla tér situated behind the building there is a replica depicting St George the Dragon slayer by the Kolozsvári brothers. Under the main arch is the figure of Christ resurrected, the chorus of angels surrounds him with trumpets, waiting for the moment of the Last Judgement. The square is bordered by the Bishop’s Palace and university buildings on the side of the Dóm tér. 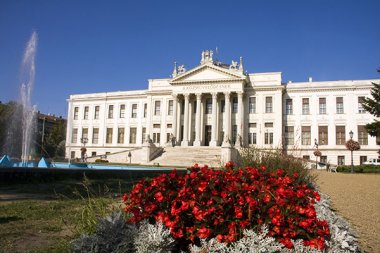