The village of Fertőd lies south-east from Sopron and is the economic and cultural centre of the area. The main attraction here is the Esterházy palace in the centre of the village. The magnificentf Baroque castle, also known as 'the Hungarian Versailles', was built by Miklós Esterházy the 'Glorious' between 1763 and 1766. He and his high-spirited wife, Countess Margit Cziráky, rebuilt the 20-room hunting lodge of József Esterházy, transforming it into the family's favourite residence. This was the golden age of the building, between 1768 and 1790. After the owner’s death, it lost its prominent role and it perished during World War II.

The facade of the castle has almost every ornamental element of the Baroque style. The symmetry of the building, along with the richly decorated winding staircase leading to the Music Room and the Ceremony Hall, are a fascinating sight. The main characteristic of Miklós's court was its high level of culture. The 126 rooms have marvellous interiors and are richly decorated. As a generous Maecenas, the owner transformed his court into a true cultural centre. Joseph Haydn, the outstanding musician of the period, served the family for more than 20 years and lived in the neighbouring House of Music where there is a memorial chamber today. The opera performances were often held in the presence of the royal family. Haydn composed a large number of his masterpieces here; his oeuvre fills three rooms. The famous Gallery of the castle, with its 348 paintings, provided a basis for the collection of the National Gallery. The arch-shaped castle complex surrounds a ceremonial courtyard built in the Baroque–Rococo style. Visitors enter the gardens through a magnificent three-part wrought-iron gate. The permanent exhibition on the history of Fertőd area can seen in the former residence of Haydn.

The recently restored chapel of the palace was granted the Europa Nostra Award.  The nearby Fertő Hanság Natural Park, furthermore, together with Lake Fertő and its surroundings have been afforded the classification of Unesco World Heritage Site in 2001, due to their environmental beauty and cultural heritage. 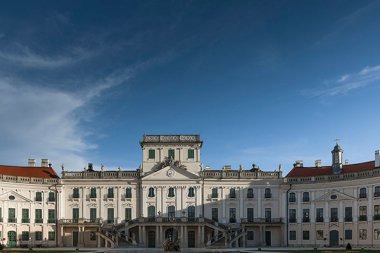