Siófok Beach is the most visited beach not only by lake Balaton but also in Hungary. It's territory is more than 8 hectare, it's capacity 13.500 people.

You can find Coke Club here which is well-known and popular among youngsters. The beach offers varied programmes and sport facilities every day and there are free concerts in the evening performed by the most popular singers and groups of Hungary. Coke Club wait the enquiers with varied programs also in 2012.

This price has an important role also in the marketing of Siófok: it means for our guests that the quality of the water is good on our beach, service is good , the programmes are interesting, so it is worth coming here. 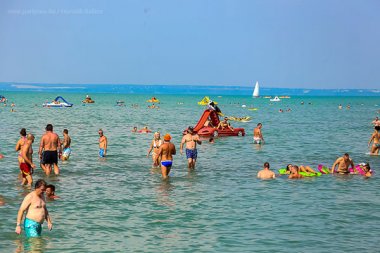