The Seat of the Hungarian Academy of Sciences

In the second half of the 19th century, wealthy people of Pécs usually replaced their vine-houses on the Mecsek slope with stone houses, holiday homes. Most of them were Alpine style wood structure buildings. Some of them can still be seen from the steep streets of the Mecsek slope. The Villa Vasváry was built by one of the wealthiest merchants in Pécs, György Vasváry in 1884. You can see the coat-of-arms of the family on the frontage. The building differs from the neighbouring buildings not only in size but also in style. Its builder gave up the traditional Alpine style and decided to have an Italian Renaissance holiday home. The well-ornamented pyrogranite constructional ceramics were manufactured in the Zsolnay Factory. In a short period of time, György Vasváry accumulated a significant collection of furniture. The collection reflected the artistic needs and taste of contemporary bourgeoisie. Most of the items in the collection were manufactured by the Zsolnay Factory, yet local ironsmiths also contributed significantly. After the 1905 death of György Vasváry, the members of the family had to sell pieces of the collection. Until the 1952 state confiscation, the building remained in the property of the family. After the confiscation, the interior of the building started to decay quickly. It was salvaged by the Academic Committee of Pécs that was awarded the building in 1969. In 1970 they carried out preservation and low-scale rebuilding. In 1980 and in the late 1990s the building was expanded significantly. During the renovation the Committee carefully preserved the Zsolnay products - sculptures, vases - that were inside or in front of the building. Some of them were even restored. The building is still the seat of the Pécs Committee of the Hungarian Academy of Sciences. 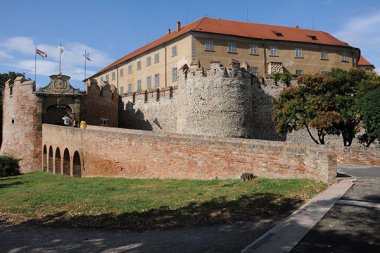