The façade of the Cathedral as we know it today was finished during the reconstruction of 1882-1891. It has preserved its medieval floor plan, the post-Romanesque-style interior and exterior.
The last internal and external restoration of the Cathedral took place between 1962 and 1968
The history of the Cathedral starts during the reign of the Roman empire. The foundations of the present lower church were laid down at the end of the 4th century. According to some studies an early Christian cathedral used to stand here, and, in the 8th - 9th century, this building was extended. The original church became a lower church during the reign of Saint Stephen as the present sanctuary was built on top. It is plausible that the two western towers were also built at this time. The construction of the Romanesque cathedral started after the fire of 1064. Upper-Italian, Lombard and Hungarian architects were working side-by-side at the large-scale construction site. Sculpture fragments from the church of these days were unearthed during the 19th century reconstruction of the Cathedral - these are now on display in the Lapidarium of the Cathedral.
Two extra towers were added to the church in the Middle Ages. The construction of the chapels took place during the Gothic age. The church more or less survived the Turkish occupation lasting from 1543 until 1686. The consecutive bishops were conducting restoration works according to various architectural and artistic styles. The Cathedral was rebuilt in 1807 according to the plans of Mihály Pollack in the spirit of Classicism, with a pointed main façade. The twelve statues of the apostles created by Mihály Bartalits were placed over the façade.

The present shape of the Cathedral was finalized during the reconstruction of 1882-1891. The restoration works were directed by Austrian architect Friedrich von Schmidt. His services were ordered by bishop Nándor Dulánszky. The goal of this reconstruction was to restore the "original", Arpad-age, Romanesque Cathedral. The length of the church is 70 metres, its width is 22 metres, the height of the towers is 60 metres, while the roof above the side-aisles is 22 metres tall.
New apostle statues were created by Károly Antal in 1968. The semi-relief of György Kiss is situated above the south gate: the work depicts Hungarian saints as they pay their respects to Virgin Mary, patron saint of Hungary. Under the relief stands the bronze Millenium Gate, unveiled in year 2000 and created by Sándor Rétfalvi.
When stepping into the church, the space is divided by the triumphal arch, this effect is only increased by the covered main altar. The frescos portray scenes of the Old Testament in the sanctuary section, and the most important moments of the New Testament in the rest of the nave, while the wall paintings of the side-aisles show moments of the lives of Saint Peter and Saint Paul. In the 13 panels of the ceiling the pictures of St John the Baptist and the 12 apostles were painted, while the remaining panels depict the 54 saints of the Christian religion. The organ is built by the famous Pécs organ factory, the Angster, it has been extended and developed gradually over the decades.
The 21 metres long and 21 metres wide lower church is the oldest part of the Cathedral, it contains 5 naves and it is divided into sections by columns. This is where the statue of Bishop Nándor Dulánszky stands, carved out of white marble by György Kis. Dulánszky started the last reconstruction and he donated the necessary funds for the works. The reliefs at the northern and southern stairs are the works of György Zala. The original reliefs were made around the 11th century. The reliefs displayed today are the copies of the original fragments found here.
The Heart of Jesus and the Corpus Christi chapels are decorated by the wall paintings of Károly Lotz. The world famous wall paintings of Bertalan Székely can be seen in the Mary and the St Mór chapels, they depict the most important moments of Hungarian history and the life of the Pécs Bishop St Mór. 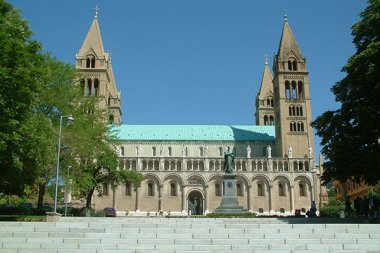