This route explores the most beautiful parts of the Mecsek forest park. No specialized hiking equipment is required: old and young alike can wander this path in everyday clothes and a pair of comfortable shoes, without any real physical effort.

The walk starts from the Paulite church at the corner of Hunyadi János and Magaslati utca (street). The steep winding path is flanked by neat, tall houses on the east side. The row of houses ends opposite no. 88 and a pine grove takes the place of the built environment. The last building next to the pine grove is the old waterworks, built in 1925. The Mecsek Gate appears at the next bend: the towered, arcaded, ashlar gateway was built in 1936. Climbing the stairs, you can look back across the city from the parapet. The winding road to Dömörkapu and Misinatető starts here.

From the Mecsek Gate, follow the path marked by the yellow square. A sign at the fork indicates that the Hotel Kikelet is only 600 metres away. The road is covered with gravel, making it easy to walk along even in wet weather. You can sit on the benches along the path to take a break and breathe in the clean air of the Mecsek forest and listen to the birds singing. Through the glades and breaks in the vegetation you can admire the beautiful panorama. From a bend in the road it is easy to spot the Niké figure of Makrisz Agamemnon's Liberty statue. At the end of the road, steps lead to the Hotel Kikelet.

Built in 1936 the Hotel Kikelet is still a modern hotel, with a large panoramic terrace and an elegant public bar. Further on, you can find the start of the road to the French monument, built by Miklós Zsolnay in 1908 on an overhanging rock with a spectacular view. The monument is a pyramidal statue made of pyrogranite, and commemorates the French soldiers who were brought to Pécs and died here during the Napoleonic Wars.

Next to the hotel, Fenyves sor (avenue) cuts through the pine trees and leads to the Pécs Zoo. The impressive villas along this road are worthy of attention. A sign at the entrance of the zoo reads: "Built by the workers of Pécs in 45,367 hours of social work in 1960-1961." This vast amount of social work started on 17 April 1959 and resulted in the ceremonial opening of Pécs Zoo on 17 August 1960. However, construction on the 6.5-acre plot continued after the opening ceremony. This general zoo is the home of 1,000 animals of 150 species.

The walk continues to the left of the zoo, in a northeastly direction. Following the red square the path runs parallel to the Mecsek narrow-gauge railway towards Dömörkapu. From spring to autumn, you can ride the train a distance of 800 metres. Dömörkapu is the tourist centre of the Misina area: name is of Osmanli-Turk origin, and means fortified pass, or literally "iron gate". On the way to Dömörkapu lies "Szaniszló's rest": behind the bench there is a black marble slab commemorating Dr. Szaniszló Mócs, teacher, nature lover, and a member of the Mecsek Association.

At the circle of Dömörkapu a stone plate on a stone arbour reads: "Raised to the memory of Viktor Ptacsek, friend of the Mecsek, by his family and admirers."

A narrow road brings you to the tourist hostel and restaurant of Dömörkapu. Following the signs to "Flóra's rest" you will come across the Dömörkapu Amusement Park. A plaque at the entrance states: "Built by the workers of Pécs in 76,679 hours of social work in the year 1961." The park covers roughly 14 acres and offers 40 different rides and entertainments including a rollercoaster, Ferris wheel, go-kart, enchanted castle, arcade, etc.

"Flóra's rest" is a round ashlar tower, built on the 404-metre high Bertalan Rock. There are breathtaking views from here towards the mining district near Pécs. A short walk can be taken around the rest on a path with banks in the pine grove. Deeper in the woods, there are benches and tables. The red and yellow path - or "Irma's path" - leads south from Dömörkapu bus station towards the Tettye plateau. The path was built from the legacy of Gyula Hamerli in memory of his wife. Arriving at the Tettye, you come across the Szaniszló path. From here you can admire the beautiful panorama and then either continue the walk or take the bus back to Pécs city centre. 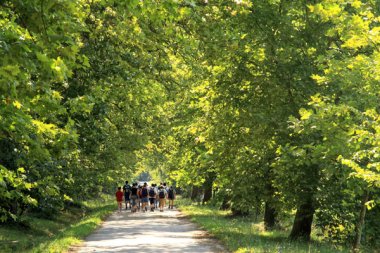