The 'keeper' of the gate of the Káli-basin is Hegyestű which can be found between Zánka and Monoszló reaching as high as 337 metres. The mountain shows a proper cone shape viewed from the direction of Lake Balaton. The northern part of the mountain has been mined, however, the remaining nearly 50-metre high mine-wall reveals the inside of the basalt volcano which was active 5-6 million years ago. The stiff lava in the crater of the volcano during the stiffening process split up into several vertical polygonal columns. This sight is unique in Hungary and it is a rare spectacle also in Europe. 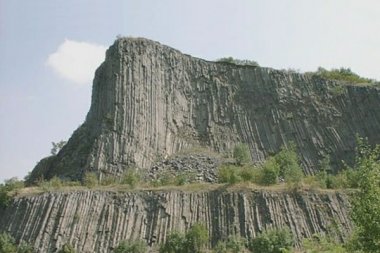