Peasant house
The unplastered dwelling house, with basalt gable walls, thatched roof, veranda, and white-framed windows on the gable end, was built in the 18th century. It was extended by several rooms in the 19th century, until it attained its present form. In the house, objects connected with 19th century peasant lifestyle, furniture used in everyday life, and various personal articles may be found. The building and furnishings are indicative of a modest farm, which was usual on the unfertile soil of Tihany.

Fishermen's guild house
The only surviving fishermen's guild house in the Balaton region belonged to the Disznďż˝i Company. The guild held their meetings here. The building is last century, unplastered, dichotomous and thatched. The interior has one room and a smoke kitchen. In the shed are fishing implements, including a tub boat, typically used by late 19th century Balaton fishermen, and utensils for ice fishing. 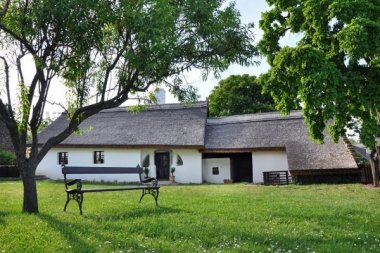