The Halászcsárda (meaning fishermen’s inn) which is situated next to the Helikon beach was first opened on June 24th, 1934. Its construction was commissioned by the Festetics family and it was operated by Gyula Prill. The building was designed by the acknowledged architect Géza Svastics, who was a resident of Keszthely. It bears similar marks to the traditional inns situated in the Eastern part of Hungary called Hortobágy with its pillared porch, thatched roof and large garden. The specialties of the restaurant were duly fish dishes and music was provided by the most popular Gypsy musician of the time, János Tigris Árvai. The restaurant which stands by the shore of the Lake Balaton quickly became the favorite resort of both the tourists and the residents with its nice surroundings.
The restaurant which was known all over Hungary from postcards flourished for long decades housing numerous wedding receptions and celebrations. In the 80s due to an unfortunate accident its thatched roof burned down. Although thereafter it was renovated but shortly it was closed down standing empty for 20 years.
In May, 2012 after a long and thorough renovation process the Halászcsárda opened its doors in Keszthely again. We await our visitors next to the Helikon beach in picturesque surroundings with traditional Gypsy music, Balaton fish dishes, Hungarian food specialties and friendly prices. 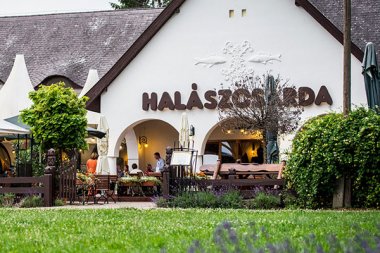