The City Hall of Kecskemét was built at the end of the 19th century in the style of Art Nouveau and was designed by Ödön Lechner and Gyula Pártos. The building reminds the visitor of the Renaissance castles of the Highlands with its dignified simplicity, varied facade (decorated with majolica), and colourfully glazed tiled roof. It is a significant element of the Main Square of Kecskemét, and the building’s carillon has been heard hourly since 1983 from its 1st floor balcony. Inside, the most beautiful part of the building is the Ceremonial Hall, which is the venue of the General Assembly meetings of the city, and also wedding ceremonies and ceremonial receptions. The period furniture of the Ceremonial Hall is hand-crafted, and its walls are decorated with historical seccos of Bertalan Székely. A guided tour of the Ceremonial Hall (25-30 min.) can be ordered at the Caretaker's Department of the Town Hall by telephone: +36-76/ 512-263 for groups. The tour, which also includes a Hungarian language guide, a small bottle of Kecskemét Apricot Pálinka and a postcard, is available by reservation. 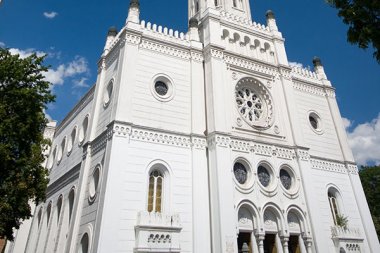