The neighbouring building is the Town Hall built by the plans of Ödön Lechner and Gyula Pártos.
The 150-year-old building of the City Hall was demolished in 1892. József Katona, the writer of our national drama worked there for 10 years. He collapsed and died at the entrance. The cracked stone monument set up at the scene of his heart attack in front of the building reminds us of this tragic event. The notice on this monument says: „The heart of the son of Kecskemét broke here.”
In 1895 the offices moved into the building of which area is 5534 m2 and has 174 rooms. On the 8th July, 1911 there was a huge earthquake in the city which did not spare the City Hall either. Its collapsed chimneys and cracked walls were soon reconstructed under the direction of Ödön Lechner. The style of the building with its nearly rectangle-shaped ground-plan mixes the forms of the French Renaissance architecture and the elements of our popular art. The Ceremonial Hall is the venue of the General Assembly meetings of the city, national and international conferences, wedding ceremonies and ceremonial receptions.
The period furniture of the Ceremonial Hall is handicraft work. The wooden furniture and the printed leather backed chairs were made in Szeged according to the design of Lechner and Pártos. The beautiful and richly coloured glass windows were made in the workshop of the famous Miksa Róth. The decorative wall-painting was made by Adolf Götz, the wall-candlesticks and the chandelier were made by Sándor Árkay, Imperial and Royal locksmith upon the basis of the designs of Szilárd Várady.
The paintings were made by the famous Hungarian painter Bertalan Székely. These paintings show some periods of the Hungarian history embracing one thousand years.
The name of the city originates from the word „kecske” (meaning „goat”), and „mét” means district. The goat can be seen in our coat of arms as well above the platform with the motto of our city beneath it: „Neither height, nor depth frightens us.” You can see the coat of arms in several important places inside and outside the building. The flag of our city with the goat can be seen in the corner, just like the flags of a few twin cities of Kecskemét. 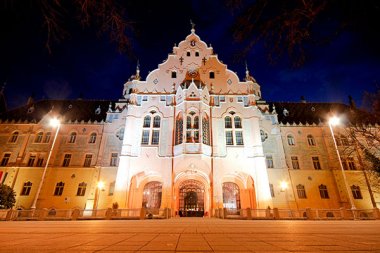