The Holly Spirit Catholic Church is the largest church of Heviz. Its seating capacity is about 1000. The foundation stone of the church was laid by Jozsef Szendi then bishop in May 1996.

The church was built based on the plans of Janos Bocskai architect. Due to the support of the town and the population it has been completed in three years. The seven sky-high towers serve as a guide for the visitors of the town. The seven towers are the symbols of the seven gifts of the Holly Spirit.

On September 9th, 1999 it has been consecrated together with the Town Hall by Jozsef Szendi retired bishop.

The interior of the church is alloying modern architecture and tradition enhanced mainly by the nice wooden panels. Its excellent acoustics makes it a suitable scene for giving organ concerts, too. The colourful windows with their Gothic-like forms are the hand-made products of Endre Simon artist from Heviz. The torso cross on the wall of the sanctuary is a 200 years old art treasure that has been granted to the church and has been restored by Gyula Karolyi restorer and painter.

The bronze statue of Christ on the left side of the altar was created by Laszlo Marton. He is also the composer of the bronze statue called the Dowager of the Hungarians standing on the right side and wearing the Hungarian Crown. The lustre glaze pictures on the walls were made by Laszlo Morvay. The wooden structure was built by Tibor Kováts and the wooden works of the interior were produced by Andras Hegedus.

There are four bells in the towers. In the garden of the church and in its neighbourhood there are several statues and reliefs.

Due to static reasons there was no bell placed in the highest tower. In the tower on the left there are two bells ringing, one of those have been founded by Dr. Bela Horvath and his family to pay homage to Saint Peter, the another was moved here from the old church. One of the bells in the right tower have been founded to do homage to Saint Paul and the costs were covered by the widow of Imre Varga, its another bell is again from the old church. 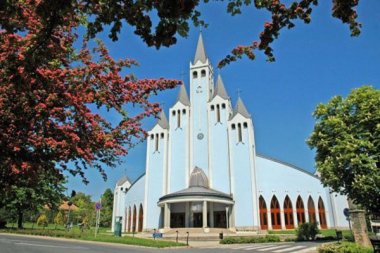