The Heart of Jesus church is located in the Egregy part of the town. It consists of two parts constructed in different ages. Close to the church there are building ruins left from the Roman age, the excavation was brought to a close in 2004.

The church was built based on the plans of Janos Bocskai architect. The belfry was built at the beginning of the 20th century, while the nef was completed in 1994-1995. The belfry built in 1905 had two floors, but in 1937 a third floor was added. The tower built in Roman style has twin windows and includes a small and a large bell. The small bell has been founded to do homage to Maria Magdalena in 1905. In 1937 the large bell was founded upon the order of Egregy village to do homage to those who died in the King’s service. To pay homage to those 16 people lost in World War I there is a table made of stone in the middle of the cope and the names are listed on this. In commemoration of them again there were 16 trees planted, together with grave-markers having each name, date of birth and birth of death carved into those. There are only 6 trees alive as of today. To pay homage also to those who died in World War II there was a memorial tablet placed into the wall of the belfry, including the names of the young people from Egregy who died. Later the tablet has been moved to the graveyard.

In 1994 the construction of the church nef started in accordance with the plans of Janos Bocskai. Then it has been consecrated by Dr. Gaspar Ladocsi major-general, chaplain general to the forces on April 22nd, 1995.

The church is also called Fradi church, due the significant support provided by Sport Club of Ferencvaros (Fradi) for the construction. The white and green colours of the interior and the small memorial corner reflect the ties with the club. 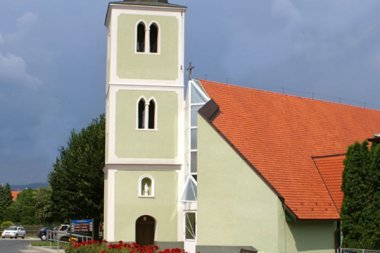