The Promenade is part of the park, located around the thermal lake. The Dr. Schulhof Vilmos Promenade is starting from the “winter bath” („télifürdő”) building, located at the end of the pedestrian zone and it leads to the main entrance of the thermal lake.  Hévíz Lake is situated on one side of the Promenade, which is shaded by sycamore trees and bordered by benches, while on the other side we can find the historical buildings of Szent András Reumakórház (Saint Andrew Rheumatologic Hospital). These buildings were built in the 1870s and they were transformed into the current two-storey structures in the beginning of the 1900s.

Each house got its own history.


György House (György-ház)
The Art Nouveau style building is located at the northern part of the „Újtelep”, an area established by the Festetics Family. It was named after György Festetics, founder of the town of spas. Currently the György House is accommodating the “A” Building of Szent András Reumakórház (Saint Andrew Rheumatologic Hospital).

Rákóczi House (Rákóczi-ház)
It was named after Ferenc Rákóczi the Second, as the building was built in 1863 and the ashes of Ferenc Rákóczi were brought back from Turkey to Hungary in the same year. Currently the Rákóczi House is accommodating the “B” Building of Szent András Reumakórház (Saint Andrew Rheumatologic Hospital).

Ella-villa
The building was named after Ella Karola, who was the daughter of Tasziló Festetics. Currently it is accommodating the “C” building of Szent András Reumakórház (Saint Andrew Rheumatologic Hospital).
If we carry on towards south, the next building is a restaurant and assembly hall. The border of the Festetics Estate stretched to this building; this was the first house built from stone. It was built at the end of the 1860s for accommodating guests of the thermal bath. An additional storey was added to the building in 1909, and it became a “Cure Saloon” („Kúrszalon”), which at the time was necessary at bathing resorts. Currently the assembly hall of Szent András Reumakórház (Saint Andrew Rheumatologic Hospital) can be found here.

House No. 7 (Hetes Ház)
The building was built based on the plans of Ferenc Lonkay, the manorial architect of the Festetics Family in 1870-71. The house was part of the “Újtelep”, where the houses were serial numbered. Therefore the choice of name for the building. Currently a hotel is operated in the building under the management of Hévízgyógyfürdő np. Kft (Hévíz Thermal Bath non-profit Ltd.).

Deák House (Deák-ház)
The original name of the building was Tasziló villa, but after the death of Prince Festetics (II.) Tasziló it was renamed to Deák House after Ferenc Deák. 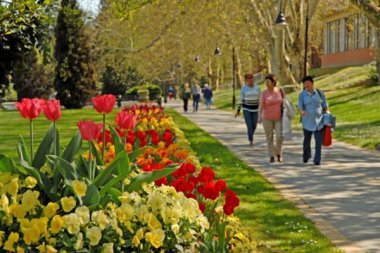