Church from the Arpadian age

The Egregy part of the town called Heviz used to be a medieval village, which has been destroyed during the Turkish occupation and has been rebuilt by German settlers in the 17th century. The traditions of vine-growing are preserved by the local oenologists and inns. One of the pearls of the town, the ancient monument church built in the 13th century is located in the Egregy part of the town. The church is surrounded by a graveyard. From the top of the hills there is a wonderful view to see.

The exact date of the construction of the church is unknown; presumably it was built in the middle of the 13th century. Written records mention it for the first time in 1341. The building was heavily damaged during the 16-17th century, in the baroque times it has been renovated in 1731. Luckily only the parts that absolutely needed action were involved in the renovation, therefore, the medieval form of the church remained. The results of this renovation included the internal and the external decorative paintings, heightening of the nef, and the missing arches have been replaced, too. The first patron of the church was St. Catherine of Alexandria. After the renovation the church has been consecrated again, and the new saint patron was St. Magdalena. Then the church has been subject to renovations repeatedly: in 1860, in 1912, between 1964 and 1965, in 1990, and in 1991.

There is an opened baroque door on the southern side. The arching of the tower has been renewed in the 18th century, and the quadrangular nef adjoins it. The only decorative element adding space to the interior of the church is the row of chambers in the northern wall.

It is important to pay attention to the paintings on the wall of the church. These are not of medieval origin, but are the clear evidence of the architectural enrichment of the church. It reflects the due respect of the folk art treasure forms. Inside the building there are the fragments of a baptising pool from the Roman age, and a consecrated cross from the medieval age.

The church of Egregy is one of the three churches from the Arpadian age left entire in the area of Lake Balaton.

The structure and the space of the orientated church are clear-cut, it has a straight sanctuary and a single nef. The tower has three floors of rich formation, with double and triple windows. The tower is covered by an octagonal helmet-shaped roof reinforced by eight quarter-timbers.

The foundations preserved the forms used for building from wood. The painted decorations and the scratched forms remained on the external surfaces. 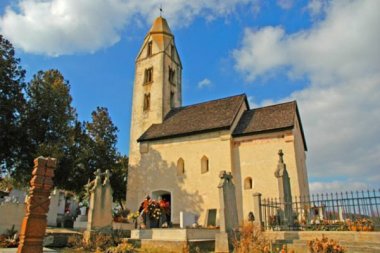