The Calvinist church was constructed between 1995 and 1998 based on the 1941 plans of Balint Szeghalmy architect from Nagyvarad. The marble decorations of the building are evocating of the Hungarian Calvinist churches of Transylvania. When creating the interior the Calvinist traditions were followed and it has remarkable woodworks.

The church is used both by the Calvinist and the Lutheran denominations for servicing and meetings. Indeed only the minority of the population of the town is Calvinist or evangelical, but every year there are thousands of visitors belonging to these churches arrive here from Hungary and from abroad. The Calvinist from Heviz used to have no church, their meetings were held in houses and in the Community Centre of the Spa-Hospital. The evangelists used the small room of the movie theatre, then the lobby of Hotel Alba and the Community Centre of the hospital. In 1994 the city council made a donation of this piece of land to the denominations. It was again the local government supporting the construction, then a funding was started in order to cover the remaining costs of the works started in 1995.

The foundation stone of the Calvinist church was laid on June 21st, 1997. The finished church building was consecrated by Dr. Bela Harmati evangelist bishop and Dr. Mihaly Markus Calvinist bishop.

Karoly Borsos and his family made the donation of the bell located under the opened arch of the tower to the church.

Services in the church are held in Hungarian and in German. 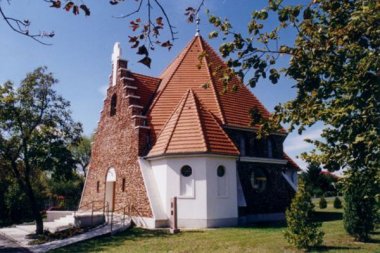