Building of the City-hall

The new building of the city-hall is located at 1 Kossuth Lajos street, it was constructed between 1998 and1999 on the place of the former town-house. It has been inaugurated on September 9th, 1999.

The building is one of the important eyemarks of Heviz; it has been built in 1950, and in 1997 the renovation was started behind the former town-hall. On January 31st, 1998 Bertalan Farkas, the first astronaut of Hungary and the mayor laid the foundation stone. The plans were prepared by Laszlo Benczur and Peter Takacs, under the co-ordination of Peter Reinholz Kossuth Prize-winning architect. The Building-trade Company of Zala county was implementing it. The useful floor-space of the building is 3367 m2.

The office of the local government is located in the building, its employees receive the clients every working day. The southern side wing includes a conference and theatre hall for 200 persons, this facility serves not only the meetings of the city, but all other scientific and cultural events.

There is an ellipse-shaped tower standing next to the main entrance housing the staircase. The carillon of 18 bells located on the top of the tower is playing several times a day. Many people are visiting the square to listen to the music played by the carillon.

While the carillon is playing puppets are going on parade, the first one is the mayor with the keys of the city-hall in his hands, tailing after by a young couple boating on the lake. They are followed by two mermaids (fish), and then comes the cherub protecting the lake against demons, finally the child riding on a baton with a lath in his hand picturing the rejuvenescent feature of the lake. 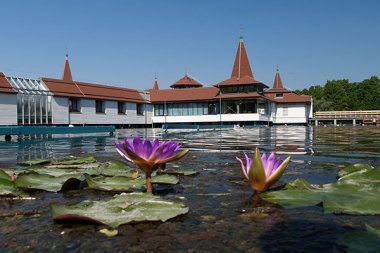