The National Theatre of Győr was opened on 2 November 1978. It is the main theatre of the Győr-Moson-Sopron region.

On the turn of the XVIII-XIXth century, just like in the rest of western Hungary, the population of Győr was mainly German-speaking. Therefore the language of the earliest theatre performances was German. The first plays in the city were religious, conducted regularly in the Jesuit school from the middle of the XVIIIth century, most often in Latin. German plays were played from the late XVIIIth century. After the dissolution of the Jesuit school, the school's refectory was transformed into a theatre.

Győr's first real permanent theatre was built in 1798 by József Reinpacher in Győrsziget. This building was expanded in 1830 to a capacity of 600 seats and hosted German and Hungarian plays in the city for over 130 years before its demolition in 1927. The city regained its theatre in 1937 by transforming a former dairy factory to a community centre, including a theatre and a concert hall. The building was named Kisfaludy Károly Theatre in 1949.

In 1964, the administration of Győr-Sopron county decided to build a theatre with a capacity of 600-700 seats. Construction began in 1973 and was completed by 1978. The renewed Kisfaludy Károly Theatre had its première on 2 November. From 1 January 1992, the institution took the name of National Theatre of Győr. Major inner reconstructions took place in 2009, the auditorium, the passages, and machinery were renovated.

The direction of the theatre focuses on the public so the profile of the theatre can mainly be characterized by popular plays, musicals and operettas. The Ballet of Győr holds its performances in the theatre. 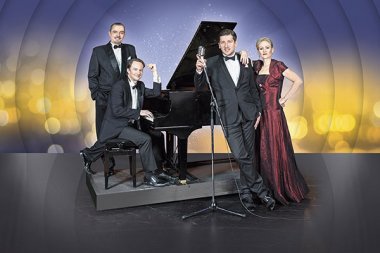