The Minaret of Eger is the northernmost historical building of the Turkish era in Europe. It was built shortly after the Turks victory in 1596 and it used to belong to the Djami of Kethuda. The 40-metre-high minaret was made of red sandstone, and it has a fourteen-sided ground plan.

After Eger was recaptured in 1687 by imperial forces, the people of the town tried to demolish the tower with 400 oxen, however, it seemed tough enough to resist this euphoric reveal of sudden freedom. Reaching the narrow balcony of it requires climbing up 97 small but high steps, however, it is well worth the effort as there is a unique panorama of the town from up there. 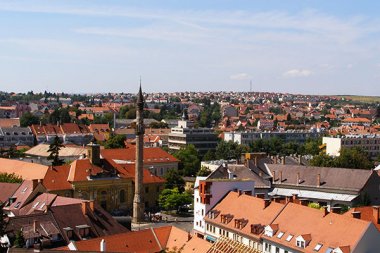