Eger is one of the most popular tourist destinations in Hungary. Situated in the northeast, the town is rich in historic monuments and famous for its wines and medicinal waters.

St. Stephen, first king of Hungary, founded a bishopric in Eger sometime between 1001 and 1009 AD. The town’s ecclesiastical importance led to the construction of a stone fortress for its protection in 1248, built around a Romanesque cathedral. Over the next several hundred years, high- and late-Gothic cathedrals were built to replace this church, which had since fallen into ruin. The episcopal seat, situated within the castle precinct, enjoyed its golden age during the 15th century Renaissance, when the town was one of the country’s most important cultural centres. By the 16th century, the Turkish invasion was in full swing, with Buda falling in the 1540’s. In 1552 the Turks turned their attention to one of the biggest obstacles in the region, the fortress of Eger. The Hungarian defenders, only two thousand strong, managed to withstand a five-week siege by a force about forty times its size. This heroic show of defiance is considered to be one of the most outstanding military events in Hungarian history, and was immortalized in Géza Gárdonyi’s world-famous historical novel, Egri Csillagok (lit. “The Stars of Eger” though the English translation used the alternate title “Eclipse of the Crescent Moon”).

The fortress of Eger, now a protected historic monument, is the site of the István Dobó Castle Museum. Permanent exhibitions cover the history of the castle, the underground fortification system (Casemates), while another exhibits the medieval forms of punishment. Carvings from the destroyed cathedral can be seen in the lapidarium, while the marble sarcophagus of István Dobó, the heroic captain of the fortress during the 1552 siege, can be found in the Heroes’ Hall. The Art Gallery, also hosted in the castle, has one of the finest art collections in Hungary with works by Dutch, Italian, Austrian, and Hungarian masters.

There are also various programmes offered to visitors alongside the exhibitions to illustrate the historical traditions of the fortress. 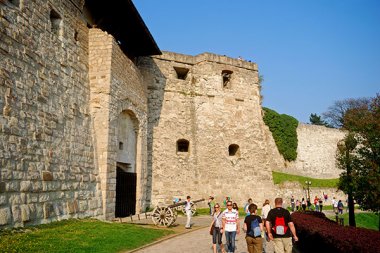