The History of Eger Fortress
The permanent exhibition presenting the history of Eger Fortress, opened in August 2001, is housed on the second floor of the Gothic Palace. The primary purpose of the exhibition is to provide a primer on the ecclesiastical and later military functions of the site, and of everyday life in historical Eger, through the help of the artefacts and discoveries of the past several decades. History is evoked through architectural models, clothing displays, and sound and multimedia presentations. The nearly 600 square metres of floor space in eight halls await visitors with a chronological presentation of the fortress’s history, from St. Stephen up through Rákóczi’s revolution in the 18th century.

Eger Art Gallery
Eger was one of the ancient Hungarian sees of the Roman Catholic Church, and so the idea of a museum also originates from its ecclesiastical leaders. We know of the collection of Bishop Károly Eszterházy (1762-1799) only from earlier sources; it vanished without a trace. János László Pyrker, a one-time Patriarch of Venice and later Archbishop of Eger (1826-1848), had a very well documented collection which he displayed in his own residence, the Eger Bishop’s Palace. This collection of masterpieces did not stay in Eger, however, as the patriotic archbishop, collaborating with other reformists, donated his entire gallery to the newly founded Hungarian National Museum (Magyar Nemzeti Múzeum). The ecclesiastical authorities of Eger tended to follow these examples, so when Archbishop Béla Bartakovics established the Lyceum Gallery in 1872, exhibiting artwork on the second floor of the Lyceum building, he had a great deal to build upon.
László Aszalay, prebend of Eger, donated nearly 100 items in 1871; these, together with Bartakovics’s 1873 purchase of Flóris Bartakovics’s 50-item collection, provided the museum’s basis. The over hundred-piece endowment of the painter Mihály Kovács (1818-1892), who spent many years working in Eger was added to the collection in 1893.
The gallery’s most valuable paintings belong to the collection of Endre Pánthy, honorary bishop and Great Provost of Eger, purchased mainly in Vienna. The donation of Eger Archbishop József Samassa, primarily of Hungarian masterpieces, represented the Lyceum gallery’s last major expansion.

Casemates (Kazamata) - "Casa Armata"
During the captaincy of Tamás Varkoch, the fortress was divided into two sections in the 1540’s, which involved the building of the East wall. This is how the inner part of the fortress, that exists today, was separated from the outer fortress, destroyed in 1702. The only means of crossing from one to the other was the “Dark gate” (Setét-kapu). A wall was excavated four metres from the gate that supported the drawbridge from where a pile-bridge led to the rest of the outer fortress. After the outer fortress was destroyed, the gate was still used, and was only closed off at the beginning of the 19th century. In the currently walled off tunnel that once led to the outer fortress, visitors can see the reconstructed giant flaming wheel conceived by Gergely Bornemissza during the siege of 1552. Proceeding from the “Dark gate”, one arrives in the ground-floor barracks (Caserma), which was built in the 1570’s during the Baldigara constructions. The 40-metre long hallways are reinforced with earth, so even under artillery fire they shielded the defenders safely. The barracks today serve as the gallery for the medieval stonemasonry. From the barracks visitors can get to the underground corridors through the Gergely Bastion and the Southeastern wing Bastion. Two branches of the corridor system built in the 1570’s can be seen: the Southeastern short and the northeastern long corridor. The tunnels were built parallel to the walls, and they were strategically significant as they secured a connection between the bastions under the ground. The tunnels were also used for detecting mines.

Baptistery (Rotunda)
Perhaps the most important architectural and archaeological finding of the early history of Eger is the baptistery, the excavation of which was started by Károly Kozák by the “Dark gate” (Setét-kapu) towards the end of the 1970’s. The round chapel was destroyed by later church building and modernisation, but the foundation walls remained in their original places covered by filling. The approximately seven-metre diameter rotunda was part of an Episcopal grange standing here in times past. Unfortunately, only the southern arch survived, and a few fragments from the Northeastern wall arch. During the archaeological excavations a built tomb covered with a stone slab was found, in which there were no bone remains, but its position and the headrest found in the grave indicate an ecclesiastical person of high rank.

Medieval Cathedrals
The first Hungarian king, St. Stephen founded ten bishoprics, among those the one on Eger castle hill between 1001-1009. For over five hundred years it was the centre of the Eger bishopric. During these centuries several churches were completed in the fortress. The cathedral that was dedicated to evangelist St. John was built in the 11th-12th century. The cathedral was the final resting place for ecclesiastical persons of high rank and rarely for the secular. King Imre I was buried in the crypt built opposite the sanctuary under the floor level. In 1241 the Mongols ravaged and looted the cathedral. The large-scale rebuilding of the cathedral in Gothic style took place in the middle of the 14th century. The permission for the patronal festival was issued by Pope Clement IV in 1347, with the help of which they managed to continue the building process of the cathedral. The head of church issued this permission during the episcopate period of (Dörögdi) Miklós II, whose successor bishop Mihály Széchenyi received a new permission for the patronal festival to continue building of the cathedral. On both sides of the church chapels were built, the sides of which were strengthened with buttresses. According to sources, by the end of the 14th century fifteen chapels were built in the cathedral altogether. The last large-scale building period was in the second half of the following century. According to the charter issued by pope Paul II in 1468, by this time the Hussites and time had badly damaged the cathedral. The plan of a massive three-nave, chapel-wreath, walk-around sanctuary cathedral was born, the eastern part of which was completed by the end of the century. With its size, its architectural solutions it could have rivalled any European cathedrals of the time, but unfortunately, due to the changing foreign affairs the building process did not continue. In 1506 the cathedral was struck by a lightening and that caused a huge fire. The reconstruction caused a financial disaster and so further building was taken off the agenda for good. After Buda came under Turkish rule, the strengthening of the castle took a faster pace. The Gothic extension to the cathedral fell victim to this fortification process, Commander Tamás Varkoch had the upper part of which demolished in 1542 and the lower part was turned into a bastion, to which the eastern castle wall dividing the fort into inner and outer fort was connected.

Heroes’ Hall
The hall on the ground floor of the palace used to be the chapel for the first castle commanders in the 18th century, then later from the end of the century the prison chapel. From this period the black and white Golgote wall painting and other drawings were left to us in fragments painted by the prisoners. Names of the heroes from the famous 1552 siege can be read on marble tablets. On both sides of the hall stand three-three statues, symbolic figures. Between the statues the remains of the castle defenders were laid to rest in the sarcophagi. The tomb of the castle commander István Dobó lies in the middle of the hall. The tombstone was presented as a historical relic on the Millennial Fair in Budapest in 1896. It was taken to its present-day place to the Heroes’ Hall in 1965.
Dungeon
The Great Cellar can be reached through a staircase from the castle yard next to the Gallery building. According to 16th century groundplans, on the site of the Gallery building there was a row of buildings divided into three sections containing ten chambers, these were the prebend buildings. A breadgiving house and a bakery were connected to this building from the south, under which there are cellars, that are mentioned by contemporary sources. This row of buildings ended with a huge granary storage, the base walls of which can still be seen. Among the mentioned buildings it is only the cellar that exists today, which - following the reconstructions – houses the exhibition titled “Execution, torture and shaming in old Hungary”. The exhibition known as the prison exhibition shows the different forms of punishment in medieval Hungary. Of the two pronged cellar, in the left cellar branch the tools of humiliation, corporal punishment and mutilation can be viewed. This is where the pillory (shame pole) stands, which usually stood on the market square for disciplining people commiting minor crimes, thieves, people leading immoral lives, gossiping women. Very often the punishment was aggravated with a shame-stone, which was hanged in the offender’s neck tied to the pole, or with shame masks or tinkler collars. Punishments were also carried out on the market squares with stocks, which also have a standing and a sitting variety. An interesting variation is the twin stocks, which was a punisment for squabbling women and quarrelsome neighbours. At the end of the corridor a condemned cell is furnished, where the person sentenced to death spent his last days. The right wing of the corridor displays the artefacts and shows the forms of execution. In the age of feudalism execution served as a deterrent in case of severe offences, thus it was carried out publicly. At the end of the corridor the tools of torture are exhibited. These artefacts, fortunately only shown at historic exhibitions, attract many tourists. 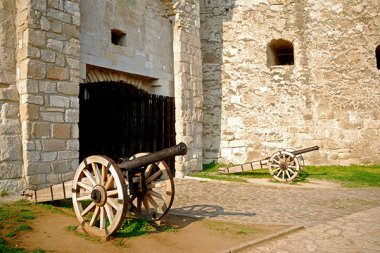