The Reformed Great Church of Debrecen is one of the most significant Classicist historic buildings of Hungary. It was designed by Mihály Péchy, and built between 1805 and 1822. Its north-south nave (with the organs at its two ends and with the pulpit at its north end) is 38 m long and 14 m wide; its east-west aisle is 55 m long and 15 m wide. The towers are 61 m high. The number of seats in the church is approximately 1800. The famous “Rákóczi-bell” – weighing 5 tons and donated by György Rákóczi in 1637 – can be seen by tourists in the western tower. The building of the Great Church has become a symbol not only for the inhabitants of Debrecen, but for the entire Reformed people of Hungary. In the spot of the Great Church there was a church already in the 12th century. On this spot was built the St. Andrew Church from the donation of the Dósa family of Debrecen, in the 15th century. After expansion, it became the greatest Gothic hall church of the Transtibiscan Church District by the 16th century, but burnt down in 1564. They started to rebuild the church that was by that time called Andrew, in 1626, and later they built a separate tower from bare bricks for the Rákóczi-bell. This was the Veres-torony (Red Tower) whose reconstructed basement wall can be seen in the western end of the Great Church. The Andrew Church burnt down together with the College in the 1802 fire.

The Great Church was the scene of two historical events. The government of the 1848-49 revolution took refuge in Debrecen, and it declared the dethronement of the Habsburgs and proclaimed the Declaration of Independence on 14th April, 1849. The Temporary National Assembly met also in the Great Church in December, 1944. 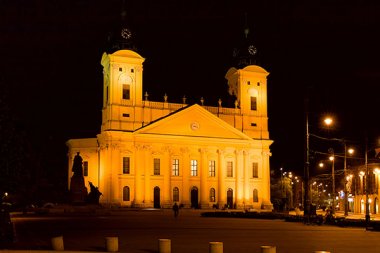