The one-time Hajdú County Hall was built in 1911-12 in secession style. In its place stood the very first inn, the Fejérló Inn of the city. During the 1848/49 war of independence Lajos Kossuth visited the restaurant of the Inn several times. The façade of the County Hall is decorated with the pyrogranite ornaments manufactured in the Zsolnay factory in Pécs, as well as with Hajdú statues. Its ball-room is called the
Árpád Hall. The walls and ceiling of this hall are decorated with plaster stuccos and the coat of arms of the settlements of the county. They hold the sessions of the county general assembly here. 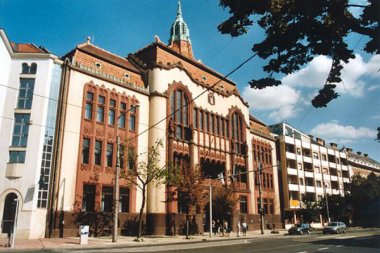