The main square of Debrecen was handed over to the public on 7 July, 2001. During the past years the square has become a real community space. The downtown pedestrian zone including the square is the scene of a number of interesting events such as the Turkey Days, the greatest gastronomic programme in the summer; the Cívis Promenade organized over the weekends in July; the Flower Carnival, the best-known and large-scale festival of the city as well as the Béla Bartók Choir Competition of international fame. At Christmas time, the City Christmas Tree is put up here and it is a really joyful moment when the people of Debrecen welcome the New Year with concerts and street balls. The square was named after Lajos Kossuth, one of the “greatest” Hungarians. He was one of the most outstanding figures in the 19th-century fight for national independence, for the abolition of feudal privileges and for the granting of civil rights as well as the intellectual leader of the Hungarian War of Independence. First, Kossuth was Finance Minister, then President of the National Defence Committee and later he was elected to the Governor-President of Hungary. He is still one of the most evident embodiments of the Revolution and War of Independence of 1848-49 in the Hungarian public mind. 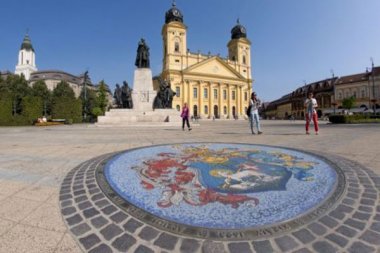