Here lived János Irinyi, chemist, between 1872 and 1892. He invented the noiseless and non-explosive match (he mixed phosphorus with lead dioxide instead of potassium chlorate in the head of the match). He managed to solve the problem after one of his professors had had an unsuccessful experiment. After a long process of experiments he patented his invention in 1836. He played a major political role in the War of Independenc of 1848-49 since Governor Lajos Kossuth commissioned him to manage gun-founding and the manufacturing of gun-powder and to supervise state factories. After the defeat of the war he was put to prison and when he was set free, he retired from political life and continued his scientific work. In the public mind he is connected almost exclusively with the invention of the noiseless match even though he was one of the first propagators of modern chemistry and he had a significant contribution to the formation of Hungarian terminology of chemistry. 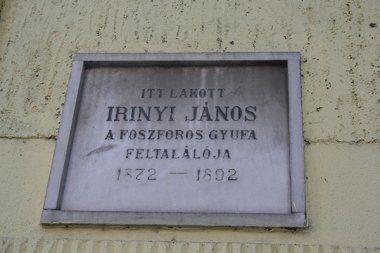