The first sundial of Debrecen was unveiled on this square on 10 July, 2009—40 days before the 40th Debrecen Flower Carnival, on the 500th anniversary of Calvin’s birthday. The flower clock is in fact a sundial. Its axle is a carved prismatic limestone column. The clock-hand is a long metal rod with metal arches under it referring to the astral orbits. The end of the hand is decorated with the wing of the phoenix which is the symbol of the city. The construction as a whole recalls the shape of the sweep-pole well evoking the world of the “puszta.” The place of the sundial was once occupied by a house in which lived Ferenc Kölcsey, the author of the original poem which became the Hungarian national anthem. The column and the sundial refer not only to the flower carnival but also to the poet. 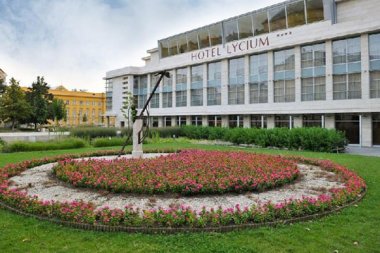