Follow us
1146 Budapest, Hősök tere
At the front of the monument is a large stone cenotaph surrounded by an ornamental iron chain. The cenotaph is dedicated "To the memory of the heroes who gave their lives for the freedom of our people and our national independence." While some guide books refer to this as a "tomb" it is not a burial place. Directly behind the cenotaph is a column topped by a statue of the archangel Gabriel. In his right hand the angel holds the Holy Crown of St. Stephen (Istvan), the first king of Hungary. In his left hand the angel holds a two barred apostolic cross, a symbol awarded to St. Stephen by the Pope in recognition of his efforts to convert Hungary to Christianity. In Hungarian it is referred to as the double cross or the apostolic double cross. At the base of the column is a group of seven mounted figures representing the Magyar chieftains who led the Hungarian people into the Carpathian basin. In the front is Árpád, considered the founder of the Hungarian nation. Behind him are the chieftains Előd, Ond, Kond, Tas, Huba, and Töhötöm (Tétény). Little survives in the historical record about these individuals and both their costumes and their horses are considered to be more fanciful than historically accurate. The back of the monument consists of two matched colonnades, each with seven statues representing great figures of Hungarian history. Topping the outer edge of the left colonnade is a statue of a man with a scythe and a woman sowing seed, representing Labor and Wealth. In the corresponding position on the right colonnade is a statue of a man holding a statue and a woman with a palm frond representing Knowledge and Glory. At the inner top edge of the left colonnade is a male figure driving a chariot using a snake as a whip representing War, while on the facing end of the right colonnade is a female figure in a chariot holding a palm frond representing Peace. 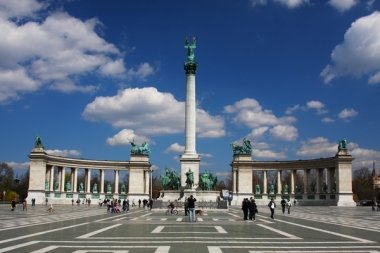 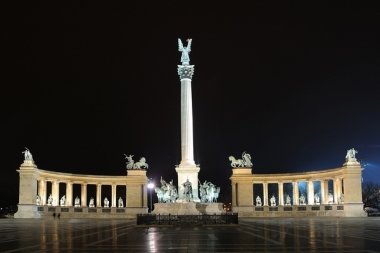