The Castle Hill was first populated and surrounded by walls by the Hungarians after the Mongol attack of 1241-1242, which devastated most of Hungary. Protective walls were erected around the hill. By the 14th century, it had just over 8,000 inhabitants. Enter the Castle District via the Vienna Gate (Bécsi Kapu), reconstructed in 1936, in commemoration of the 250th anniversary of the Siege of Buda in 1686. The western side of Bécsi Kapu tér is dominated by the National House of Archives, built in 1920. Proceed to Kapisztrán tér, where the Mary Magdalene Tower stands. Under Turkish rule, this was the only church allowed to remain Christian: all others were converted into mosques. The church was destroyed in World War II, and not yet fully reconstructed. In the north-western part of the Castle District is the Museum of Hungarian Military History, whose collection numbers over 28,000 items from the 1490's to the present time. From here, it's a short walk to Táncsics utca, where the Museum of Music History has a permanent Béla Bartók Memorial Exhibition on display in a Neo-Baroque house. After this, let's go underground! Turning onto the medieval Úri utca, a brown flag marks the entrance to the Castle Labyrinth, which is a vast system of natural caves formed by geothermic activity, enhanced by man. Some of its wells produce red wine, so be careful when climbing steps afterwards. After returning to the surface in Úri utca, it's worth seeing the Museum of Telephony, which displays the history of Hungarian telecommunications from the beginning (1881). At the end of the parallel Tárnok utca stands Trinity Square (Szentháromság tér), with many historical buildings and monuments. Here stand the Old Town Hall of Buda, which lost its original function when Buda, Pest and Óbuda were united in 1873. In its cellar the Hungarian House of Wines awaits its guests with a full representation of Hungarian winemakers, and offers a palette of services for visitors, such as wine tasting - both for groups and independent travellers. The Baroque-style Trinity statue, in the middle of the square, commemorates the victims of the 1691 plague epidemic. The right side of the square is dominated by the Mathias Church, surrounded by the turrets and walkways of the Fishermen's Bastion. The church is officially called The Church of Our Lady, and served as a coronation church from the 16th century on. Its vast ecclesiastical collection and treasury is open for visitors. During the centuries, the church underwent several major transformations, the first of which was the addendum of the Mary-gate (Mária-kapu), and in 1470, the 60-metre south side tower, with the King's raven ensign, was erected. During the Turkish occupation, the church was turned into a mosque and its walls were whitewashed; in the 17th century, it was again rebuilt in Baroque style. Today's Mathias Church is the result of a major renovation between 1895 and 1903, by star architect of the age Frigyes Schulek. The frescoes are the works of famous Hungarian artists such as Károly Lotz, Bertalan Székely and Mihály Zichy. The Fishermen's Bastion was built simultaneously with the last major renovation of the Matthias Church, in an unique architectural unison. The Bastion has seven turrets, each symbolizing a Hungarian tribal leader. Its foundation is a part of the former medieval fortified defensive wall. The structure has never served defence purposes, only that of decoration. Its approximate location gave home to a huge fish and grocery market in the Middle Ages, and in the Water Town directly below the walls, most of the population made a living from fishing - hence the name, paying tribute to the fishermen. The structure has two long, ornate staircases leading up to it: the central staircase is called the Schulek Staircase, and the hidden tunnel-like one connects a Water Town street with the southernmost turret is called the Jesuit Staircase (Jezsuita-lépcső). As we walk to the south from Szentháromság tér on Tárnok utca, the Arany Sas Pharmacy Museum, built in 1745 in Classicist style with Baroque elements, comes to view. At Dísz tér, which is the southern gate of the residential part of the Castle Hill, stands the ruinous building of the former National Defence Command. There are large-scale excavations going on behind the square, where remnants of the previous castles from the Middle Ages are being unearthed. Diagonally across the flagpole-lined esplanade is the Sándor Palace, which is the Hungarian President's official residence. Built in 1806, but horribly damaged during the Second World War. It was beautifully renovated in 1989. This is the upper station of the funicular railway, the Budavári Sikló. 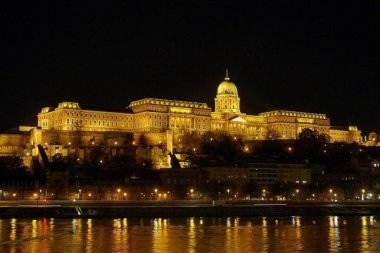 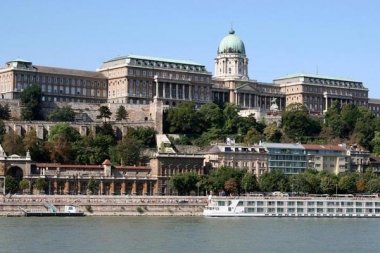 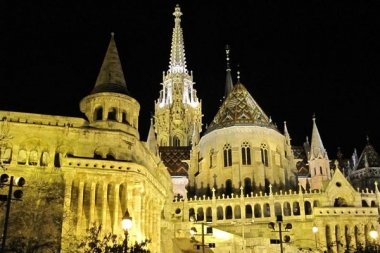 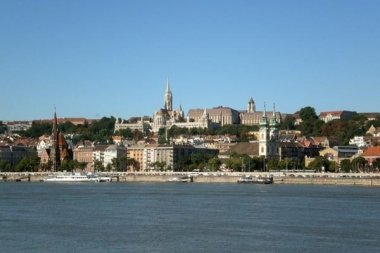 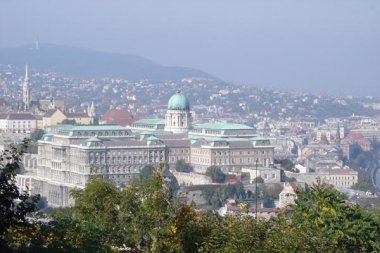