The area had been a known water supplying site as early as in the Roman age. The district around the springs was honoured as a holy site and archaeologists have even found in the territory of the bath the base walls of the sanctuary. As a result of the latest diggings, traces of taking the springs in possession and details of constructions were discovered. Their archaeological processing is in progress.
We know of a hospital having been built o n the shore of the sea located in the area in the period of King Mátyás.

In 1930 the joint-stock company Római Fürdő Rt. was founded. In 1964 the astoundingly renewed open-air bath was opened which ever since has preserved its form created that time. In 2000, three pools of the open-air bath were modernised: the pools were equipped with filtering water whirling devices. The open-air pool was transformed in a fancy pool with chute, neck shower and effervescing facility and the children's basin became a playing paradise. 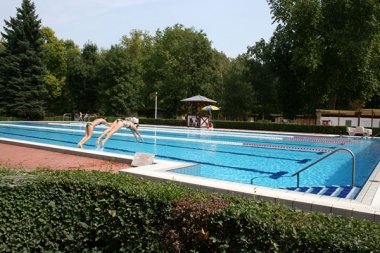