– where the Past Meets the Present

Our theatre reopened 1 year ago, in January 2012. Originally it was a dime cabaret which was open in 1929 under the direction of Dezső Kellér with the most famous actors of that era, such as Gyula Csortos, Mária Sulyok, Manyi Kiss, Gyula Gózon, Kamill Feleki.
After it worked as a cinema until 1988. After the Rock Theatre moved in buti t was used as a reherseal place.  From 1997 it was operated as Bethlen Contemporary Dance Workshop House until the end of ministerial support.

Bethlen Square Theatre intends to be a meeting point of artists committed to different artistic values and the scene where different forms of art can mix and discover each other. Our theatre operates as an incorporative and production-oriented one, which means that we are open to troupes from the whole array of performing arts, and besides theatrical and dance performances. We offer our visitors weekend family programs, dance houses, dance and film clubs, festivals and other performancesWe are not an ordinary inclusive theater that reopened on the spot of an old theater turned intocinema, but fills a niche as a communal space serving contemporary arts.

It’s home for a number of companies, such as the oldest contemporary dance company of Hungary, Central Europe Dance Theatre, and also provides for its regular audience. Week by week open dance workshops await fans of contemporary dance, season ticket holders are treated to extraordinary theater shows, and families are welcome to kids’ events in this special space.
The center of action, though, is the theater’s club targeting young expats studying and working in Hungary. Club nights will see the past meeting the present, Budapesters
meeting New Yorkers and foreigners from all around the world. 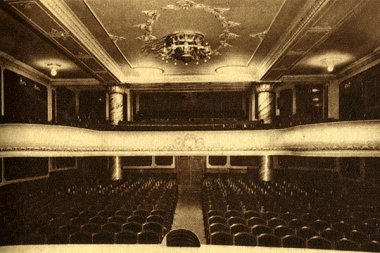