The square used to be the salt market in medieval times but later slaughter-houses operated here. In 1747 the Ursuline order instituted a convent and school and built a church on the square. The two floor building which can be seen here today obtained its final form in 1860 and is the work of architect Nándor Handler. The oratory of the convent hosts the Roman Catholic Ecclesiastical Art Collection. The Romantic-Neogothic church of the Immaculate Conception was consecrated in August 1864 by János Simor, bishop of Győr.

An interesting building on the Ursuline square is the house with arcade at the corner of Új street and Szent György street.  It is of medieval origin and slaughter-houses operated in it once. Nowadays the house hosts temporary exhibitions.

The Fountain of Mary in the middle of the square was a present of atonement by citizens to the Franciscan order. 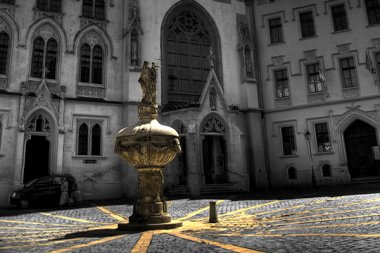