The house narrowly escaped demolition in the 16th century when the City Council wanted to destroy it in order to enlarge the square (the house protrudes onto the square). King Louis II denied his approval claiming that the tearing down of the house would disrupt the architectural unity of the Main Square. This regulation dating from 1525 is the first known Hungarian official decision relating to monument protection.

During the 17th century a chemist’s named Angel operated in the house which also used to be the home of a number of families of chemists and doctors. A famous inhabitant was Ádám Gensel (1677-1720), doctor and meteorologist, who detected the influence of weather fronts on the human body.

The house had arcades before its reconstruction in 1850, when the Gensel family enlarged it by bricking up the arcades and the corridor. Since the renovation of 1966-67, the building has served as a Pharmacy museum. The exhibition actually is a 200 year old interior of a chemist’s shop.

The building is divided from the neighbouring Gambrinus-house by a narrow passage-way. Beneath the grid between them a section of the former Amber Road (a commercial route) can be seen. 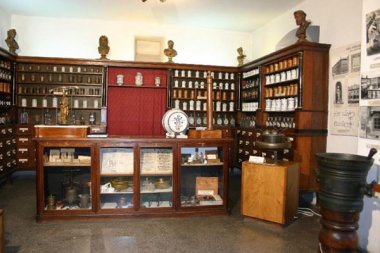