The Franciscan order in Sopron founded their monastery in the centre of town around 1280. They built a church - popularly known as "the goat church" - which is one of the most outstanding works of Hungarian Gothic architecture. Joseph II dissolved the Franciscan monastic order in 1787, and the church was taken over by the Benedictine monks. During the centuries the church was the venue of coronations and numerous parliamentary sessions. Its well-proportioned, finely-architectured tower is one of the most spectacular buildings of the unrivalled Main Square. The masterpieces of fresco painters and other artists, the lancet windows, and the unique Capistran pulpit are of extraordinary value.

The late Baroque door of the Benedictine Monastery next to the Goat Church leads to the Chapter House. This room is one of the most beautiful works of early Gothic religious architecture. It first served as a prayer house, later as a burial chapel, and finally as a Loretto chapel. Archaeological excavations unveiled Gothic pillars, beautifully crafted corbels, and parts of medieval frescoes. The 13th century building was reconstructed during the 14th-15th centuries and the frescoes date from that period. The masks and the figures with human-heads and animal bodies hidden in the leaf ornaments of the pillars' capitals represent the seven main sins.

Beyond the architectural values of the hall, relics of medieval stone statuary of the Sopron museum are displayed here. Among the ornaments, the heraldic animal (a goat) of the chief benefactor family (the Gaissels) can also be seen on their armour. 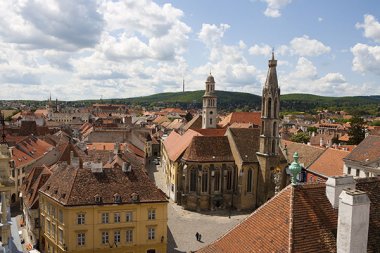