Firewatch towerThe Firewatch Tower at the northern end of the Main Square is the symbol of Sopron. Its round shaped lower part was built on the remains of the Roman age town wall, and served as the northern tower of the city from the 13th century onwards. The tower acquired its present form with its Baroque balcony and helm roof after the great fire of 1676. The tower guards had the important role of watching the area and they signalled the position of the fire with lanterns at night and coloured flags at daytime. The double-headed eagle on the tower was a gift from King Ferdinand II and Queen Eleonora on the occasion of the parliamentary session and the queen's coronation, both held in Sopron in 1622. However, it was placed on top of the tower only after the great fire, on Emperor Leopold’s nameday. The foundations of the tower were damaged during the demolition of the old City Hall in 1893. To recover their stability, a wide main port was built based on the plans of Frigyes Schulek.

The Firewatch Tower is the symbol of allegiance. In a referendum held on 14 December 1921, Sopron and eight neighbouring villages expressed their wish to remain part of Hungary (instead of Austria). In memory of the referendum, a neo-Baroque door-frame and a statue entitled "The people of Sopron paying homage to the mythological figure of Hungaria" were erected, designed by Rezső Hikisch and Zsigmond Kisfaludy Stróbl. Climbing the spiral staircase (200 steps) a splendid view of the historic town can be enjoyed from the balcony, the former post of the guards. 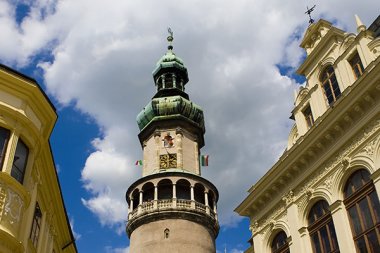