The treasury typically consists of liturgical objects; the donors - bishops and aristocrats - donated valuable goldsmith masterpieces and textile garnitures to the church. From the XV - XVI. centuries mainly Hungarian works became parts of the collection, while from the XVII. century up to the beginning of the present century mainly pieces from Vienna, owing to the strong Austrian ties. The treasury's collection of gothic chalices is extremely valuable, the earliest piece of which comes from the beginning of the XV. century. The cloisonné enamel-type and filigree-decorated chalices are marvellous relics of art from the Matthias-age. One of the most beautiful monstrances of the treasury was made at the end of the XVII. century; this piece was donated to the Cathedral by bishop Ágost Keresztély in 1701. The textile relics of the Győr Treasury are from the XV - XVI. century; earlier they belonged to the church requisites or they were parts of the liturgical priest dresses. The renaissance mitre embroidered with real pearls showing the arms of Pál Bornemissza, Bishop of Transylvania can be considered an outstandingly precious jewel treasure. The library-museum is the result of the amalgamation of two old, valuable libraries; it contains the old books of the former Seminary and the Cathedral. Now the Győr Diocesan Treasury and Library contains some 67 thousand volumes of book, 190 incunabula and 362 manuscripts from before 1850. The most valuable books are the Korvina, originating from the library of Matthias Hunyadi, as well as the Zalka-antifonálé, the biggest Hungarian codex, which was taken from Nagyvárad to Győr. Stones and stone remains from the Bishop's Castle and the Cathedral in Győr, deriving from medieval and modern times, can be seen in the Museum of Stonework of the Diocese of Győr. 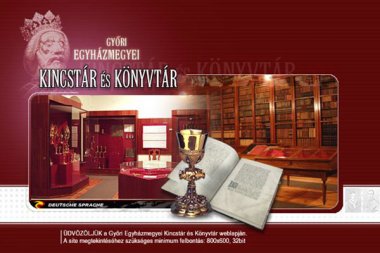