The first church of the Jesuits who settled down in Győr in 1627 was built between 1634 and 1641 according to the plans of Baccio del Bianco, modelled on the church Il Gesú in Rome. The monastery and the school were also standing by 1667. The two towers are from the XVIII. century. After the dissolution of the Jesuit Order the Benedictines became owners of the building complex (1802). The interior of the church is early baroque. The nave was decorated in the middle of the XVIII. century; the main altar-piece (The apotheosis of Saint Ignatius), the ceiling pictures of the sanctuary and the nave (The ascension of Saint Ignatius, Angelic salutation) were painted by Paul Troger, the most famous artist of the Vienna baroque painting. Lajos Gode made the beautiful baroque pulpit in 1749, while the organ case is from 1755. 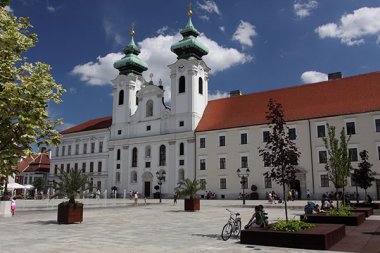