The roman catholic church in the village of Rábaszentmiklós was built in the second part of the XIIth century. The trefoil Romanesque-style church with a single tower is actually a unique example in architecture. The three foils of nearly identical base area are the symbol of the Holy Trinity.

In the centre of the village stands the Cross of Győr, a column erected in memory of the reconquest of Győr from the Turkish army (1598).

The Csorna Premonstratensian provostship was founded by the count Osl family around 1180.  The church is of medieval origin but Haubt Moravian architect changed it to the present baroque shape between 1774 and 1786. The provostship was under secular hands from the beginning of the Reformation until 1694, when the Premonstrants returned. The grace-picture of Saracen Mary, which most probably is a version of the Czestochowa grace-picture, was taken to Csorna from the Bohemian Grádics around 1757. A number of miraculous recoveries occurred in front of the picture, and – as a consequence - the place became a pilgrimage site.

The church ale is on the last day of May.

The first church in Osli was built by János Kanizsai, Archbishop of Esztergom to the honour of the Blessed Virgin Mary. A great honour surrounded the wonder-working picture of the Blessed Virgin, but the protestant Nádasdys destroyed the church and the grace-picture. The Esterházys later re-built the church. In 1690 Palatine Pál Esterházy brought here the lime-carved Virgin Mary-statue from Kismarton. Numerous miracle cures happened in front of the statue, which are also signalled by the votive presents. The statue is also called the Guardian Lady of Rábaköz by local people.

The main church ale is held on the first Sunday after the Feast of the birth of Virgin Mary (8th September).

According to the legend of Tétszentkút, an imperial soldier, Ailert Keresztély had a dream in 1715 according to which he would recover from his illness at the spring of the Tét forest. As this really happened, he built a small chapel beside the spring, in which a copy of the picture of the Helping Blessed Virgin was placed. The news of the miraculous cure launched the pilgrimage. The Szentkút church was built between 1715 and 1744 in the place of the chapel. The picture of the crowned patron saint, Saint Anthony of Padua was placed on the rococo high altar, above the grace-picture of the Helping Blessed Virgin.

The church ale is on 12 September, the Feast of Virgin Mary.

The chapel of Szany was built in 1753, and was extended and equipped with stained glass windows in 1901. In the place of the tiny water well a wild pear tree was once standing, which, according to the legend blossomed in January, amidst snow-covered and rimy trees. The wild pear tree would be Saint Ann and its blossoms the Blessed Virgin. On the request of the faithful, the bishop at the time authorised to build a chapel at this miraculous place. He then sent a picture painted in brass as a present, depicting Saint Ann, Saint Joachim and the young Blessed Virgin. This picture has enjoyed great honour since then. The faithful from Szany carried all construction material to the forest by hand, praying and singing. The chapel has been a dominant spiritual centre of Rábaköz since then.

The church ale is on the weekend following Saint Ann’s day (26th July).

The ancient inhabitants of the village of Máriakálnok were Germans. The start of the pilgrimage in Máriakálnok goes back to the XVIth century. The wanderers often visited the water well outside the village, which was believed to have curing powers. According to the legend, a fisherman from Máriakálnok caught a lime-carved Mary-statue in the Danube, and built a chapel to its honour near the well. The old chapel was replaced by a new one to the honour of the visit by landlord János Viczay in 1663. Only the statue stayed unharmed by the devastating fire in 1873; János Zalka, Bishop of Győr, rebuilt the chapel. The statues were then given crowns and a silver sceptre was placed in Mary’s hand.

The major church ales: Holy Trinity Sunday, and the Sunday after the Feast of the Birth of Virgin Mary (8th September). 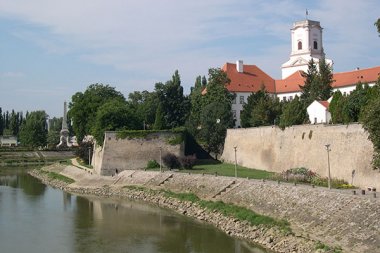